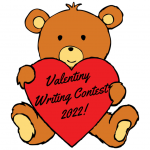 It’s time again for a short story contest with author and blogger, Susanna Leonard Hill. The 7th annual Valentiny Contest is to write a Valentine’s story for children that is 214 words or less. This time the story needs to include someone who is proud. Here is my entry:

Gwendolyn had a big idea. A huge idea. An idea so enormous that when complete, it would stretch 25 feet high and 200 feet long. Gwendolyn wanted to cover the side of her town’s abandoned candy factory with a painted mural. She had sketched out her plan and gotten approval from Town Council. Her “Bringing Hearts Together” mural idea was bursting with colorful dancing hearts. “What better day to unveil my completed mural than Valentine’s Day?” thought Gwendolyn.

But with only a week before the holiday, she had exhausted her efforts to find a painter. When it came to the giant task of a 5000 square foot painting, nobody in town had time.

Then Gwendolyn had bigger idea. A huger idea. An even more enormous idea that would bring the busy town together AND get her mural completed. She cut her sketch into tiny pieces and put them in separate envelopes. Gwendolyn mailed the pieces to each person in town along with instructions to meet in front of the old warehouse on February 14th with a paint brush.

That Valentine’s Day, the mural was finished in record time with everyone adding a small portion to the gigantic puzzle. Admiring the finished product, Gwendolyn said, “Now THIS is something we can ALL be proud of.”