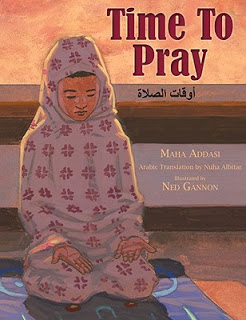 Time to Pray (Boyds Mill Press, 2010) is the award-winning story of a young girl, Yasmin, who is visiting her Grandma in the Middle East. The detailed illustrations and rich text (with Arabic translations included) take you on a journey of spiritual growth as Yasmin learns about the rituals of daily prayer from her grandmother.

I had the opportunity to interview the very talented pair that created Time to Pray. Author Maha Addasi and illustrator Ned Gannon.

Maha, tell us a little about your history. What got you interested in writing children’s books? 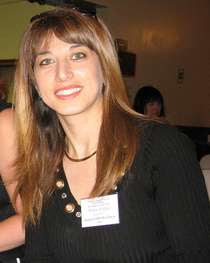 Maha: A little about my history. Hmm. I’ve always been a reader. My dad, God rest and bless his soul, was a medical doctor. He mastered the English language while going to medical school. His education had been in Arabic until then, and he had to work triple hard to learn all the medical terms and take his tests and Board Exams in English. He vowed that if he ever had children, he would make sure they learned English as early as possible. So I was taught to read at a very young age. There’s a Dick and Jane book that starts with: I walked and walked, and what did I see? I saw a cat. The book goes on and on, with Jane seeing various animals. This was my first recollection of reading with my dad. Each time I missed a word, he would make me start all over again. “I walked and walked” was how I dedicated my first published book. My dad sought perfection, and I was blessed by his dedication.

Ned, tell us about your history. What got you interested in illustrating children’s books?

Ned: I started drawing before I knew what illustration was at the age of three, and I first wondered about illustrating books in fifth grade when I was given Treasure Island with the wonderfully atmospheric paintings by N C Wyeth. But I always tried to tell stories with pictures so children’s books made sense for my creative output.

Maha: I grew up reading tons of Enid Blyton books. The Paddington books made me fascinated with marmalade and train stations. I loved Agatha Christie 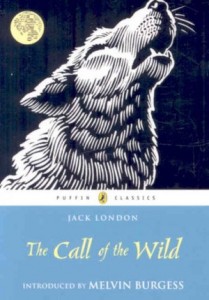 and other mystery books. I vividly remember John Buchan’s The Thirty Nine Steps. I later got interested in Jack London’s Call of the Wild and White Fang. The Crucible made me think, and Lord of the Flies scared me. John Wyndham’s Chocky was a creative science fiction that really got me interested in writing. I loved a hodge podge selection of books and magazines and comics. When I finally traveled to England, it was a dream come true. I celebrated my 8th birthday in England, and that trip changed my life. I was suddenly in the setting of the books I had read, or had read to me. 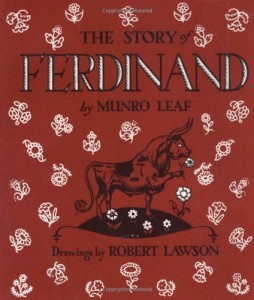 Ned: When I was a small boy, I loved Ferdinand the Bull and a lesser known title called, Thy Friend Obediah. Now three children’s books I have treasured with my kids are: The Terrible Hodag and the Animal Catchers, The Serpent Came to Gloucester, and The Arrival.

Share with us the background of Time to Pray. How did this book come to be?

Maha: Time to Pray is a story of grandma-granddaughter bonding. When I worked full time in the media, I traveled quite a bit covering events for television. My young daughters stayed with my parents when I was away. I wanted to capture something of that strong bond that my girls have with their grandparents. They sometimes quote something one of my parents had said, and I realize I had missed hearing that, or it reminds me of when I was their age or younger.

Time to Pray received an Honorable Mention from the Arab American Book Awards in 2011. Tell us about the award and how you found out you had won.

Maha: Time to Pray won the Arab American Book award because it introduced children to some cultural facts without being didactic. I believe that was a main criteria. The information had to be woven into the fabric of the story. When I got the phone call from the Arab American National Museum announcing that I won, I thought I heard them say that I had won the top award. Of course Honorable Mention is great, but immediately on finishing my conversation, I called my parents, editor, publisher, emailed my writer’s critique group en mass, to tell them that Time to Pray won the Arab American National Book Award. Retracting those calls and emails, was tough, to say the least.

This is not your only book about Middle Eastern culture. What else have you written? (And please share your good news about your most recent book!) 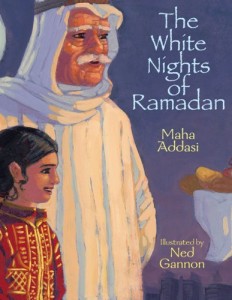 Maha: Before Time to Pray, I wrote another book called The White Nights of Ramadan (Boyds Mill Press, 2008), which was also illustrated by Ned! This year, I received an email from the Arab American National Museum that my most recent book, The Kids Guide to Arab American History (Chicago Review Press, 2013), actually won 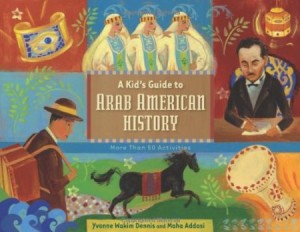 the Arab American National Book Award. I read the email three times before realizing that this was for this year and it’s the top award in the children’s book category! I called Yvonne Wakim Dennis, my coauthor on the book, and she was taking a walk in New York. I heard her yell out our news to people walking by. It was really funny. 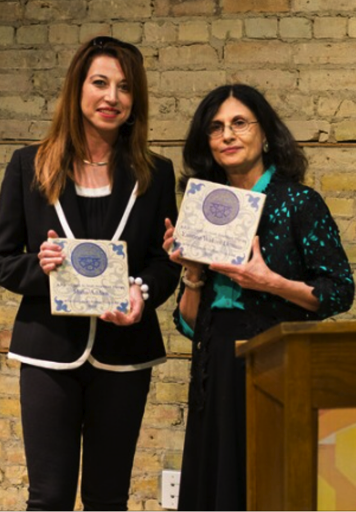 The illustrations so beautifully reflect the culture in the book. What research did you do, Ned, to ensure that the pictures were culturally accurate?

Ned: This part was tricky for me. I was depicting a culture and a place to which I was an outsider. I did a lot of reference-seeking in books, some magazines and through online sources; but it was Maha who really assured the editors that the details were faithful to the spirit of her story. For instance, I felt pleased with the mosque scene in the end, but it went through a few revisions in the sketch stage before I had things the way they needed to be. I also took great interest in the geometric designs. And – by the way – congrats to Maha on the award! 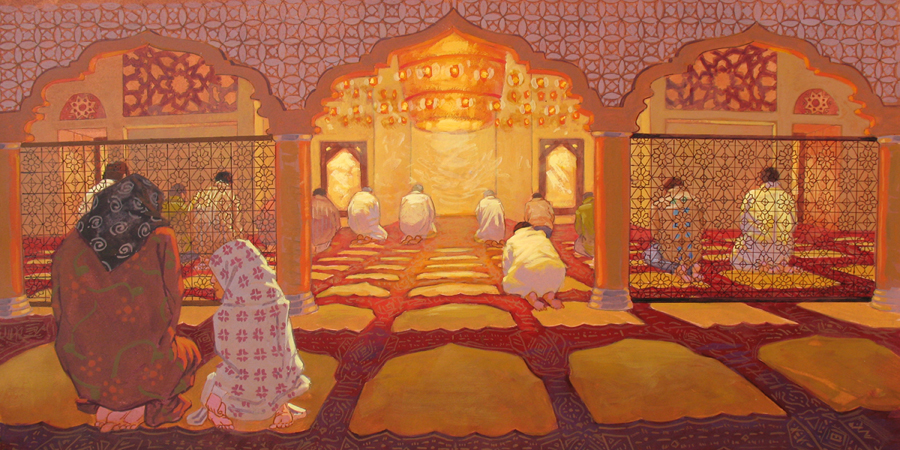 Early bird, middle of the day, night owl or catching quick moments? When do you do your best work?

Maha: I used to work early in the morning. I would get up at 4:30am, run on my treadmill until I could open my eyes, then I would work until 6:30am. Now I write whenever I get a chance. I do bits and pieces, more often in outline form in longhand, then I start typing away. I used to write at home, but I find I do a lot more work at coffee shops and libraries and book stores where I can be surrounded and inspired by books. It was the opposite at first. I used to walk into a library and feel overwhelmed that there are so many books out there. I felt there was no way I could compete. It took a while to realize that I wasn’t competing with anyone, and that it was my journey. I was going to get there at my own pace.

I’m fascinated by creative workspaces. Tell us a little about yours.

Ned: What I have around me varies on where I am working these days. I have a small studio space that houses a lot of supplies and flat files and when I am there I surround myself with reference for my current project and images that inspire me, often a picture of a wolf. I also work digitally now, and then I am in an office room often surrounded by the remnants of a Lego battle which was left there by one of my two children, Claire or Eliot. 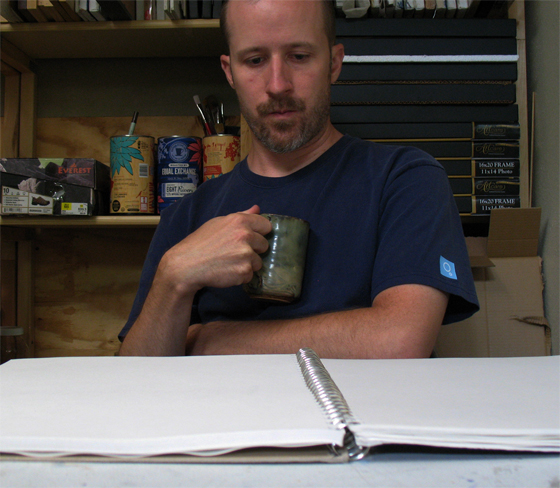 What media did you use for this book?

Ned: The art for this book was rendered in ink, pencil and acrylic on Arches watercolor paper with other media mixed in on occasion.

What project(s) are you working on now?

Ned: I take commissions as they come but never know when they will arrive in my inbox, and so I creep forward on a wordless graphic novel project I have been creating.

Maha, what advice would you give aspiring writers?

Maha: Write daily, even if that means writing in your head. Sometimes you could think of solutions for plot issues while taking a walk, or running errands. You need to be open to that.

Ned, what advice would you give aspiring illustrators?

Ned: Find artists you like that no one else knows about. Make a gigantic list of all your favorite artists. Study clouds and trees. Don’t view the business of art as a bad thing, but don’t be all about money either—in essence respect yourself and others. Make time to work on your art even if it means you haven’t seen the latest television show or music performance that your friends are talking about. Love the time you get to work on art, and find good friends who understand what you do or do it too.

Ned: Though artists are not supposed to have favorite colors, I undoubtedly do. I have always been attracted to the color cerulean blue (this is a pigment name, which artists tend to use). It is the color of sky and water. And once I learned that it derives from the Latin word caelum meaning, “heaven sky”, I knew it was my favorite.

Maha: Labneh, which is a bit like plain Greek yogurt, but a little more tart and eaten with toasted pita, olive oil and kalamata olives. I can subsist on labneh alone.

Ned: My favorite drink is water, because what a miracle it is that makes almost all life possible. My favorite food is music.

Do you have any pets?

Ned: I had a dog that my wife and I were blessed with on a whim visit to the North Shore Animal League when we lived in New York City. Agnes, our mixed breed energetic and eccentric dog, lived for twelve years, but died in 2010 of lymphoma. I love dogs but haven’t been able to get another one until I get over Agnes.

Ned: This summer I read, Sweeney Astray by Seamus Heaney. Currently I am reading The Lathe of Heaven by Ursula K Le Guin.

Thank you Maha and Ned! Congratulations again, Maha, on your recent success!

Ned can be found at:
www.nedgannon.com. 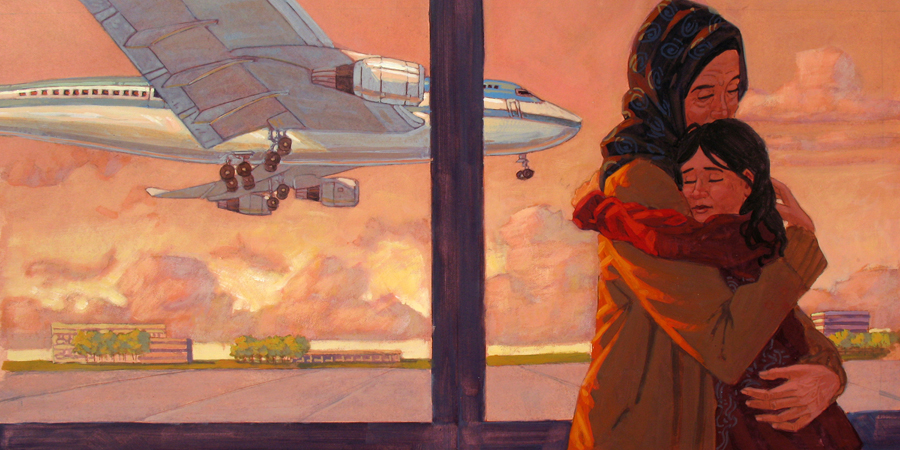