How many times has an idea popped into your head and because you didn’t write it down, it fell into the abyss never to return again? Don’t you hate that? For me, part of fully committing to this journey of being a children’s book writer several years ago, meant believing that any idea could have potential. I try to jot down all of my ideas the moment I get them.

The most important way I do this is by keeping journals. My journals are full of first drafts and revisions of stories, observations, poems, quotes, notes from conferences and critique meetings and lots and lots of IDEAS. Since I started, I have filled five journals and I’m halfway through my sixth. And when I don’t have my journal at the ready to write down a new thought, I write it on a napkin, I type myself an e-mail on my phone or a make a voice recording. Anything to not lose the idea. Eventually everything gets transferred or taped into my current journal. I like it all in one place.

Some ideas make me say, “Really? That would make a terrible children’s book. Don’t even write it down.” But I do. I always do. Why? Because you never know when a past idea will spark something months or years later. You never know when that little nugget of an idea might turn out to be golden. 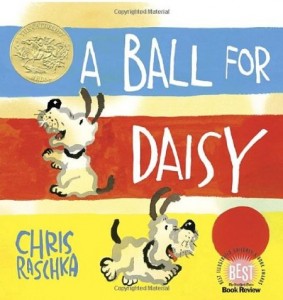 I had the privilege of hearing the author and illustrator Chris Raschka, speak at Shenandoah University’s Children’s Literature Conference last June. He spoke about visual storytelling, which he does brilliantly. He is the author/illustrator of the Caldecott Award winning book, A Ball for Daisy. Raschka said his book started as an idea ten years before the book was ever published. Ten years! He wrote the idea down and went back to it every so often, until he finally decided to make it a reality. He confessed that this picture book took much longer than the 80,000 word novel he wrote!

Keeping a journal, writing down every idea and reading back through them is extremely beneficial. It’s surprising how often I read something I wrote years and sometimes even just months ago that I’d forgotten about. One day when you’re struggling for an idea or need some inspiration, you may need to go only as far as your old journals. 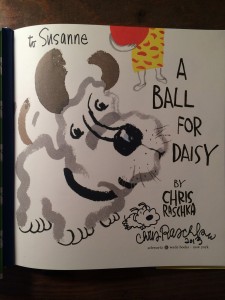 After hearing Chris Raschka speak, I went home with my own autographed copy of A Ball for Daisy which I keep on the bookshelf behind my desk. It reminds me to periodically flip through my journals at old ideas, digging for that golden nugget from the past that shines through.